In wildlife situations a lot of animals are due to succumb to the consequences of extreme weather conditions, a critical shortage of food and/or water resources, competition with other species, predator pressure, fire, drought or any other nameable calamity. These are part of the natural selection process.

In the case of the Przewalski horses the chance that many of them will perish is much greater, because of their history of prolonged captivity and the difficulties in adjusting that follow from this situation. The effects of possible calamities and environmental factors are less severe for a big population, because there will always remain enough survivors to overcome the numerical damage. Whereas external influences will have a much greater impact on small sub-populations, such as the one at Hustai, an example will perhaps elucidate the foregoing. 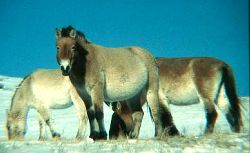 Once in every ten to fifteen years Mongolia use to be visited by extreme harsh winters and is undergoing periods of protracted drought. In the last twenty years this phenomenon occurs more frequently. During 2000 and 2001 the country had again been afflicted by such weather extremes. It is quite remarkable that not many casualties did occur among the free ranging Przewalski horses, although there had been temperatures as low as -38 C. The condition of the free roaming Przewalski horses remained relatively good.

The extreme weather conditions had a greater effect on the sixteen horses that had arrived with the final transport from the Netherlands in May/June 2000. The first Mongolian winter would turn out to be fatal for five of them. From November onward the physical condition of the stallions began to deteriorate considerably, but the condition of the mares only worsened from January onward. Three mares and two stallions did not survive the bitter cold. Surplus feeding and humane intervention could not prevent the Hustai staff from losing these five animals. The present wild born population is evidently better adapted.

The herdsmen that live in the buffer zone surrounding Hustai National Park sustained serious damage.  Overgrazing and moreover the drought of some summers brought the livestock  in a rather bad condition when winter started. Some herdsmen did not take the right precautions like purchasing sufficient reserves of hay. The loss was great: up to 50% of domestic animals died through malnutrition and frostbite.

The only ones that cashed in on the severe weather circumstances was Hustai’s wolf population. Their numbers we

re growing. Although the livestock in the Park’s buffer zone remained an
abundant supply of food, the wolves were developing a taste for wildlife. This certainly influenced pressure upon the Przewalski horses.

Hustai National Park has a rich variety of vegetation. Meanwhile the free roaming Przewalski horses instinctively know where – dependent on the time of year – they can find the best food and where in winter there is little snow. Even a deep layer of snow is no obstacle to them anymore. Where good quality grasses are hidden underneath thick covers of snow, the horses range themselves tightly to one another and start trampling. In this manner some of the snow is cleared revealing patches of nutritious green grass.

At Hustai there is also ample opportunity for the Przewalski horses to find shelter against heat, cold and against annoying insects.

Having the benefit of hindsight we now can say that by choosing the Hustai National Park for the reintroduction of Przewalski horses we have indeed been very lucky. There is an abundant supply of food and enough water to feed and drench hundreds of horses and other wildlife. The Przewalski population seems to prosper well in this much fortunate habitat; proliferation is good and the mortality rate is relatively low. Notwithstanding the complicated climatologic conditions a steady population growth can be expected. The positive effects of the protection of the Park and the presence of natural wild horse grazing is visible in the growing numbers of other wild species.