In the 1970s the future perspective of the wild horses grew even dimmer than ever. The only measure by which the tide could be turned seemed to be the reintroduction of the species back into their original wild habitat.

Three people from the Netherlands took the lead and founded the Foundation for the Preservation and Protection of the Przewalski Horse (Rotterdam, 1977). At that time only a mere 300 Przewalski horses were left in the world.

Already extinct in the wild, their future in captivity was threatened as well. The population has a small genetic base. Thanks to high inbreeding less foals were born and horses died younger. Unnatural social life and activity in small enclosures without grass effected their health and well being.

Aim of the Foundation

The aim of the Foundation was twofold. Firstly the development and implementation of a computerized studbook information system, fed by data made available through the general studbook keeper for the Przewalski horses in Prague. With the help of this system it was possible to set out a breeding strategy that could avoid the pitfalls of inbreeding. 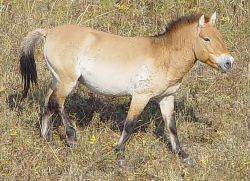 Secondly the Foundation was striving for the ultimate re-release of the species into its original steppe habitat.

After a great many years of living in captivity the wild horses would be able to follow their own natural instincts, find and select food and live again in harem or bachelor groups. The Foundation realised that such a process of running wild would take its time. It was decided that there should be an intermediate phase in which the selected Przewalski horses were to be released in nature reserves that provided them with semi-wild living conditions.

The Foundation bought from  a number of zoos several hardly related Przewalski horses. WWF-Netherlands was one of the main sponsors. The breeding programme that was set up in the various so-called semireserves turned out to be a great success: almost each of the Przewalski mares foaled each year. Infant mortality decreased. Finally in 1992 the first shipment of Przewalski horses to Mongolia took place. After this until 2001 four other transports followed with a total of 84 Przewalski horses.

Today, 2016, about forty years after formation of the Foundation, more than 350 Przewalski horses (takhi) roam free in the beautiful mountain steppes of Mongolia. The Hustai National Park was established especially for the horses and a team of well educated and motivated Mongolian staff provides their protection, manages the park and conducts scientific research. The Mongolian people take pride in their takhi and their National Park. The Hustai National Park stands out as it is the only National Park in Mongolia that is managed independently and not by the Government.

These positive results could not have been achieved without the committed support from our donors and the enormous dedication shown by the many volunteers and board members.  As a token of our appreciation they received a beautifully illustrated chronicle that describes the many activities that have led to the realization of the Foundation’s objective.

Taking a step back

The Foundation for the Preservation and Protection  of the Przewalski Horse has achieved its goals and takes a step back. Part of its activities will be downsized and the Hustai National Park will not be visited as frequently as before. In turn, this will reduce the input to our annual Newsletter ‘The Przewalski Horse’. For this reason the board has decided to discontinue the Newsletter and the membership administration.

The Foundation’s assets are to be transferred to the Foundation for the Preservation of the Hustai Nuruu National Park in Mongolia. This Foundation was established in The Netherlands in 1998 as a trust-fund that aims to provide support for the protection and research of the Przewalski horses that roam free in the Park. The trust-fund is well managed and from its revenues the fund annually allocates its support. This support remains essential as the Park’s revenues entirely depend on tourists and visitors fees. It is intended to merge both Foundations in due course.

The board of the internationally renowned Foundation Reserves for the Przewalski Horse (FRPH), established in 1980 in the Netherlands, will remain active and committed to the well being of the takhi in Hustai National Park in Mongolia. The board has a representation in the board of the Hustai National Park Trust in Mongolia and will provide the Trust with advice and support as well as financial assistance.