Mares receive their first foal from the age of three. Stallions leave the harem of birth when they are about two years old. At the age of more or less five they start to look for mating partners. Only after having established a harem of his own the stallion can start to procreate. Before that they wander on their own around the existing harems, probing the established leaders. 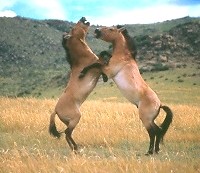 Then a long and intense struggle with one of the harem stallions for his mares will start. Such a fierce confrontation can take days even weeks. However, once a harem stallion is beaten it will take a long time before the mares will comply with the authority of the conqueror. Some of the mares will even leave the group with their young and try to join another group.

In the first years of their arrival in Hustai National Park most mares gave birth in April and May. In Europe these are the months with the highest birth rate due to the optimal growing of grasses. In Mongolia, however, it can still be very cold during these two months with icy rains preceded by chilling winds. Fortunately, since a few years the birth season starts later. This can be seen as a adaptation to the wild.