The FRPH (Foundation Reserves for the Przewalski Horse) was responsible for the project management. MACNE was responsible for the execution of the park management. The international cooperation between two NGO’s (MACNE and the FRPH) has proven to be very fruitful. It has not only been important for its technical results and the international exchange but also for the stability it provides compared to changing governments and government policies, to attract other donors and to draw the attention of the general public towards this part of the world. This NGO-based management of a protected area is a model that might be applied successfully elsewhere in Mongolia, and – indeed – in the world.

During the project period the park staff was assisted by several Dutch experts in developing a long term management- and research plan and in training the park staff. At present the park staff consists of a well experienced qualified staff of some 50 people which is able to manage the Park independently (2016).

In 2003 the Hustai National Park (HNP) became an independent, non profit, non governmental organisation (NGO) under the Mongolian law. This NGO “Hustai National Park Trust” was founded by MACNE, the FRPH and the Buffer Zone Council. Based on a long-term contract the Mongolian Ministry for Nature and Environment has delegated the management of the Park to the new NGO.

Strengthening education and public awareness was one of the main tasks of MACNE. The return to the wild of the Przewalski horses can be seen as a ‘vehicle’ for a conservation program for the Mongolians. They are very proud of their ‘takhi’ and thus will become sensitized to the value of, and the threats to the steppe of their region. An extensive network of relations with politicians and decision makers, potential donors, with the local communities and all types of national and international organisations has been made. The Park is in the mean time well-known on national and international level. It has developed itself as a model for other national parks in Mongolia. 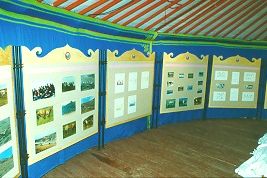 At the border of the Park an information centre is established with an exhibition on the reintroduction program, the fauna and flora of the Park and the cultural monuments.

In the mean time a modern tourist camp has been built for accommodation of small groups of tourists, ecovolunteers and guest researchers. Many meetings, workshops, conferences and seminars have been organised as a platform for information exchange and provide opportunities for public awareness raising for HNP, especially among the national and international conservation communities.