From 1992 until 2001 the Foundation organised five transports to Mongolia in which a total of 84 Przewalski horses from the various semireserves in the Netherlands and Germany were involved. After their arrival in Hustai National Park the groups were immediately released into large fenced-in acclimatisation areas. In these areas, situated out of sight of one another, they remained for one to two years to adapt themselves to the new vegetation types, the severe Mongolian winters and to integrate as a group. The acclimatisation areas were large enough to provide the horses with an abundance of grass and water; administering extra supplies of food and water turned out to be superfluous. Only in extremely severe winters some hay was given.

Each group consisted of four to five mares with an unrelated stallion. Most of the animals were in the age of three to five years old at the time of the transport. The biennial shipments made it possible to create a well-balanced age distribution in the starters population after ten years. By sending some extra stallions a reasonable ratio between stallions and mares could be reached.

After their definite release from the fenced-in areas the harem groups soon began to establishe their own particular ‘home ranges.’ A home range is the area that a group daily uses in search of food, beverage, minerals and shelter. We learned that the released harems frequently went back to the acclimatisation areas in which they had been spending the first years of their life in Mongolia. So, to 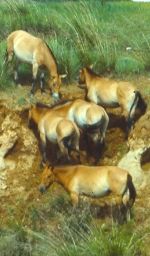 reduce the pressure the already established and released groups had on the new arrivals, new acclimatisation areas were built.

A total of seven of these areas were built at different suitable locations in Hustai National Park, with the advantage of a better distribution of the groups over the Park.