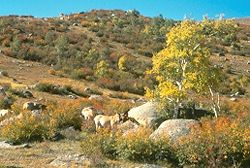 What should we do if we want to heighten the chances for a sustainable preservation of Hustai’s Przewalski population?

There are two options: expansion or enhancement of the population’s habitat.

Hustai National Park covers an area of around and about 50,000 ha. An expansion is not to be expected in the short term. However, an enhancement of the habitat of the free takhi is something, which can certainly be achieved by taking the necessary effort. There is enough food to feed thousands of horses. However, when we look at the Przewalski horses specifically and how they use the terrain and their social organisation we must conclude that Hustai can only put up with a restricted number of them.

Domestic horses can live together in extended herds. They are capable of surviving in relatively small areas. Quite different from the domestic horses the takhi have a different habitat use.

In the Hustai National Park a typical takhi family group consists of six to at the most eighteen to twenty individuals: a leading stallion, mares, foals and some juveniles.

The families keep out of sight from one another. During spring and summer a stallion is always prepared to fight off rivals, that might want to steal his mares. They respect large distances from each other. However, in winter it often happens that some of the harems can be found grazing at a rather close range. There is no rivalry between the different harem stallions. 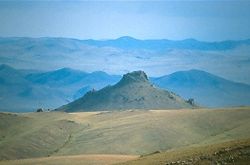 In 1998 the released groups had an average home range size of about 667 ha. A home range is the area that a particular harem daily uses to find food, water and shelter. The total acreage of Hustai National Park is 50,000 ha, of which 5% is forest, the rest is mountain steppe vegetation. In theory the Park has room for about seventy Przewalski groups, provided that the respective home ranges do not overlap.

So, the carrying capacity of the area depends on how the free roaming Przewalski horses will make use of it. At present the different home ranges are diminishing in size and tend to overlap with an increasing number of free roaming groups.

A variety of measures were taken to increase the Park’s own carrying capacity and to enhance habitat conditions. Although the middle section of the Park contains sufficient grass to feed Przewalski horses and other wildlife, the arid terrain is lacking the necessary natural water resources. New wells were made at places where the ground water runs close to the surface in order to open this area to the Przewalski horses and to attract other wildlife.

Experience taught us that Przewalski horses that have been released from the acclimatisation areas tend to form their home ranges nearby these areas. Therefore, it was decided to build three new acclimatisation areas in the Park’s centre and in the eastern valley for the horses that arrived in 2000. After their definite release, these groups were able to establish their home ranges in these “uninhabited areas”.