Hustai National Park (HNP) is a mountainous forest steppe area of 50.600 ha in the lower spurs of the south-western range of the Khentei mountains, situated some 100 km to the south-west of Ulaanbaatar, the capital of Mongolia. The south-western part of the park extends into the valley and the flood plain of the Tuul River. This river takes its source on the Khentei Mountains, flows by Ulaanbaatar and HNP before joining the Orkhon River that sheds its waters into Lake Baikal in Siberia. The National Park lies between latitudes of 47.35 and 47.52 degrees North, and between longitudes 105.40 and 106.37 degrees East. The park is relatively small: maximum East-West distance measures about 34 km, while in the North-South direction maximum distance is about 26 km.

Hustai National Park covers the territory of three sums (villages). The southern two-third of the Park is within the territory of Altanbulag Sum, while the Northern one-third is about divided between Bayanhankhai Sum and Argalant Sum.

To maintain, restore and preserve the ecological balance of the ecosystems and the cultural values of the National Park, to the benefit of present and future generations of local, national and international communities.

Hustai National Park is under a continental climate, altered by effects of altitude. Climatic conditions are harsh and meteorological extremes lead regularly to “natural disasters”. Annual average temperature is 0,2 centigrade. Average monthly temperatures vary between – 23 centigrade in January with coldest temperature of -40 till -50 centigrade, and + 20 centigrade in July with warmest temperature of +31 till +42 centigrade. Average rainfall is 270 mm., 80% of which falls during the short growing season which lasts from May till September. During springtime heavy winds and storms are frequent, blowing away a good part of the top soil of the neighbouring agriculture lands of Argalant and Bayanhankhai Sum.

There are 10 natural streams in the Park. Some of these small streams do not freeze in winter. Within the Park a number of water sources are diminishing. The permanent water sources are typically associated with the two major forest complexes in the West and the East of the Park. There are signs that the groundwater levels are falling.

The soils of the Park are generally of a sandy to loamy texture. Organic matter content in the top soil is high.

A total of 55 species of mammals (2016) has been recorded. Besides the over 350 Przewalski horses in 2017, 500 marals (red deer), about 50-100 Mongolian gazelles, seasonally increasing to over 500 heads, including black-tailed gazelles, some roe deer, migrating Arkhali sheep and over 20.000 Bobac marmots inhabit the park. Several rodent species, including susliks (ground squirrels) and long tailed hamsters can be seen. Common predators are; Corsac foxes and wolves (more than 25 in general), Siberian lynxes, manul cats, badgers, martens, etc.

The total of bird species recorded is presently (in 2015): 43 families, 119 genera and 223 species. It includes 6 species of black stork, bar-headed goose, great bustard, osprey, white-tailed eagle, hooded crane, black vulture, long-eared owl, eagle owl, little owl, and great-spotted woodpecker. Some species stay permanently, some spend summer in the area of the Park and grow up their offspring, other species just pass it and a few species come to the Park only in winter time.

The area of HNP is showing many traces of ancient habitatio 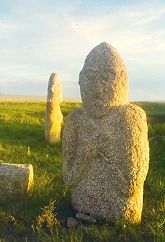 n and use. Among the oldest ones are the many Neolithic graves that dot the terraces of the Tuul river valley, as well as some of the inner valleys. The oldest ones are reported to be over 4000 years of age. The most spectacular grave-site however lies just outside the Western border of the Park and is composed of a number of statutes. This grave is built by people of Turkish origin (the Ongot) in more recent times (about 1200 years ago).

The sacred Hustai mountain has long been the object of worship by the local people. This has provided the mountain and its ecosystems with a good protection against over-exploitation of its resources over the ages.