In the period 1994-2004 many different projects for the local people have been executed in the bufferzone of Hustai National Park. One of them was the medical and hygienic project. Although this project has been terminated and integrated already within the present regional medical care network, it is a good example of how the collaboration with local organisations started to combat poverty.

This project was executed by the Foundation Reserves Przewalski Horse (FRPH) and the Mongolian Association for Conservation of Nature and Environment (MACNE), and financed by the Dutch Ministry for International Cooperation (DGIS).

The medical care in Mongolia before 1992

Before the economic recession in Mongolia , due to the transition of a centralized economy to a market oriented type, there was a widespread basic medical care, which was subsidised by the government.

The three soums (villages), which offered land for the reintroduction of the Przewalski horses and the realisation of the Hustain National Park, had their own small clinics. They took care of the basic health needs of the inhabitants and the herdsmen which live around the soums. If there was transportation available, the doctors visited them in their gers (nomad tent) or they went to the hospital themselves on horseback.

Health care for the herdsmen round the Hustain Nuruu reserve

Since 1992, the medical care had deteriorated strongly due to large increase in costs and the decrease in the government financial contribution. Everybody must have their own health insurance since 1994. The health care for children under 16, disabled people and pensioners is still paid for by the government.

The Mongolian people use a lot of traditional medicine, but there are also western medicines available, though in irregular quantities. They are available without a doctor’s prescription. This can lead to irresponsible use.

The soum clinics and the hospitals in the capital Ulaanbaatar are difficult to reach for the herdsmen. In a country of sparse population like Mongolia, adequate transportation is extremely important to ensure effective emergency services. But often there is shortage of ambulances, fuel and spare parts.

From 1990 to 1993, the number of doctors in soum hospitals has decreased by 38%, the number of day nurses had fallen by 85% and pre-natal resthomes by 50%. More than half of the clinics were housed in inappropriate premises (Government of Mongolia, Poverty Alleviation Programme).

In the past, the pre-natal care was well organised. When a herdswoman was pregnant, she went to a clinic or a pre-natal resthome some 2 weeks before the delivery. Many nomads could pay for this anymore. The women wait as long as possible before going to a clinic. This can mean that heavily pregnant women have to be transported to the clinic on horseback at the very last moment. More and more women deliver their babies in their own gers (1990: 0.07%, 1993: 2,2%), where the hygiene often is inadequate. Partly for this reason the mortality rate of mothers and children strongly increased (1993, infant mortality rate 57.4; Maternal mortality rate 2.4 per 1000) (source: Mongolian Ministry of Health).

There was a strong need for help

The Mongolian Ministry of Health had recognized the problems the people in rural areas had to deal with. They found that action should be taken, to bring a halt to the deterioration of the medical care. Several projects started, for example by the UNDP and improvement was already noticeable. Mongolia did not always have the necessary means and therefor help and funding from abroad was very welcome.

After a pre-study, executed by the Dutch and Mongolian staffmembers of the Biodiversity-project in and round the Hustain Nuruu Park, it became clear that the herdsmen live under primitive circumstances in their gers. The basic health care was at a low level, just like the hygiene. Preventive health care is hardly noticeable and a doctor often was called at a late stage.

When the Dutch team first arrived in Hustain Nuruu in 1993, they brought a small supply of medicines with them. The local herdsmen often came asking for these medicines. The team did not have sufficient knowledge to give adequate help. When the Medical project started in may 1995 and a Dutch nurse came to the Park, herdsmen, as well as people who live in the Park came asking more and more for medical help.

During the Project a simple ambulance was available in thePark, financed by the Project. The herdsmen and the people who live in thePark could make use of it 24 hours a day.

The nurse, sent by the Foundation Reserves Przewalski Horse, trained the Mongolian nurses how to practice first aid and judge the seriousness of complaints. If a doctor or a hospital was needed the patient was brought by ambulance to them. 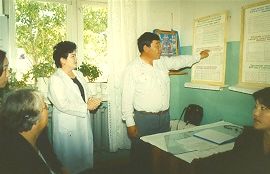 The Medical project cooperated closely with the clinics in the soums around the Park. Cooperation with other medical projects was very important; not just for exchanging information, but also to prevent overlapping of activities. The ‘Mother and Child’ program of the UNDP, for example, was very important, as well as the project of the Mongolian Women Association. They had a Poverty Alleviation Program and tried to rise the hygienic standards. The project had stimulated training courses for local volunteers having key roles in the community to visit gers of nomads to discuss hygienic standards.

To safeguard the future of the park as a protected area, it is of foremost importance that the local people support the aims of the project. This can only be achieved by actively engaging them in the project and make sure that they do not feel chased off or neglected. To do so, for example, the project provides jobs for the local people, i.e. rangers, wardens and nurses.

The Biodiversity Project was not only concerned for the well-being of the Hustai National Park and the animals and plants that live in it, but also for the herdsmen who live in the area surrounding the Park. This resulted in goodwill for the Biodiversity Project and the reintroduction of the Przewalski horse. The aim of the Medical Project was to increase the human well-being and the quality of life for the herdsmen a little.

The Medical Project was financed by the Dutch Ministry for International Cooperation (DGIS) for a period of two years. The Dutch Foundation Reserves Przewalski Horse carried the executive responsibility. Several Dutch hospitals have donated medical equipment to the three soum clinics. DGIS gave each of the three clinics a financial donation. They used it to refurnish the clinics, which were in bad repair. For example, they bought beds and furniture to create rest-rooms for pregnant women.

During the last years many developments took place. All three local villages (soums) are still very proud of their medical service and care. The small hospitals are all renovated, they have sufficient medicines, there are jeeps available for the medical staff to visit ill herdsmen families. The training of volunteers to visit herdsmen famlies in the field for a better hygienic care is still continued and integrated in the medical network. The clinics even received an award from the government for their good work.