In the meantime, at Hustai National Park, the number of free roaming Przewalski horses has grown considerably. Dozens of harems and bachelor groups are roaming the breathtaking mountainous steppe landscape in Mongolia. It appears that the dream will come true: the building up of a free living sustainable  population of at the least 500 Przewalski horses or takhi. The present positive trend is a clear indication of the successful progress of the reintroduction process of this endangered wildlife species. The preparatory time for this project took more than twenty years. Step by step the activities systematically progressed towards the transportation to and release of in total 84 healthy and genetically fit Przewalski horses into the Hustai National Park.

An important aspect in the preparatory stage was the start of a breeding programme  in a number of Dutch and also German nature reserves. In these European reserves, semi-reserves as they were being called, the Przewalski horses had the chance to run wild again after more than thirteen generations of captive breeding. This to improve their chances of a successful adaption into the wild and to prevent too many losses in the new environment. During the 1990s the selected offspring of the various breeding groups were sent to the original habitat of the species in Mongolia.

It is important that the method used and the experience gained during the preparatory stage is well recorded. Not only for the preservation of this particular wildlife species, but also for the benefit of future reintroduction programmes.

It is a piece of history, that offers an overview of the principles, method and experiences of the preparatory phase of the Przewalski horse reintroduction programme.

The background philosophy of the semi-reserves was well-rendered in an article that was originally published in the Proceedings of the Fifth Symposium on the Preservation of the Przewalski Horses (Zoologischer Garten Leipzig Germany, 1990), and upon which the following section is based.

After the successful conclusion of the transports and the building up of the founder population at Hustai National Park the first phase of the reintroduction process ended. In the mean time the Foundation gradually finished the breeding of Przewalski horses. No Przewalski horses were left in the Netherlands: Noorderheide, Ooijpolder and Goudplaat and in Germany: Klosterwalde and Springe (Meppen). An exception was Nature Park Lelystad. In 2001 the ownership of the last breeding group was formally transferred from the Foundation to Naturepark Lelystad (The Netherlands).

On the 5th International Symposium on the Preservation of the Przewalski horses at Leipzig (1990), Inge and Jan Bouman, board members of the Foundation gave a report on the semi-reserves project IUCN/WWF No. 3077, which started in 1980.

This section is based on an article published by the Zoölogischer Garten Leipzig ( Germany ) in the proceedings of the symposium. It gives information on the aims of the semi-reserves, the different nature reserves in the Netherlands and Germany and the behaviour of the Przewalski horses in semi-wild living conditions.

The reintroduction programme for the Przewalski horses had a systematic approach and was executed step by step. The first phase of the programme started in the semi-reserves.

In 1990, when the article was published, the Foundation had 56 Przewalski horses in five semi-reserves and another eight foals were soon to be born. 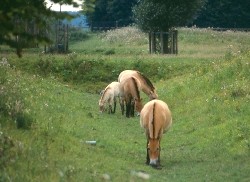 The first semi-reserve was established at Nature Park Lelystad owned by the Ministry of Transport and Communications. It comprises at present 40 ha. (100 acres) of pastures on clay soil alternated with parts of woodland. All over the territory hills are constructed to give the Przewalski horses chances to get out of sight of each other if they want. A variety of herbs is shown along the hills. Enough food is available for all year grazing, no extra supply is needed in winter. Only in Lelystad public is allowed, but they cannot touch the horses. All other semi-reserves are closed to the public. The stallion Apoll, donated by the Cologne Zoo, was the lead stallion of a group of four mares from different genetic backgrounds born in Memphis Zoo (USA), Bern ( Switzerland ), and two in Owslebury ( England ).

The second semi-reserve was established at the Noorderheide, in the centre of our country, which measures 250 ha. (625 acres) with a variety of heather fields on sandy soil, small pastures and different types of forest. A harem of the stallion Tello and his four mares were kept on this completely fenced in nature reserve owned by the State Forestry Department. These mares originate from Leipzig ( Germany ), Midway Manor ( England ) and Bern ( Switzerland ). Unfortunately, the vegetation is too poor, so only on the Noorderheide we had to give the Przewalski horses extra food. All other territories have sufficient food for year round grazing. Mineral licks were added everywhere. Breeding at Noorderheide has been stopped in 2000, because enough horses were transported to Mongolia.

The third semi-reserve was situated in the Ooijpolder near Nijmegen. This nature reserve covers 30 ha. (75 acres) and has an ideal vegetation of different types of pastureland on clay as well as sandy soil. The hilly territory is full of herbs alternated by parts of woodland and natural lakes. No extra foodsupply was needed during the winter. Five mares born in the semi-reserves in Lelystad and Noorderheide were kept in this area together with the stallion Vagur obtained from the USSR. The last group of horses from this area has been transported to Mongolia in 1998.

The eleven stallions born in the semi-reserves were kept on a 40 ha. (100 acres) large peninsular in the south of the Netherlands, called Goudplaat. They had formed two groups each with their own leader. They do very well on the herbaceous vegetation. The stallions look for shelter behind the high thorny bushes and trees and drink water from a natural pond. Not all stallions were suited for transport to Mongolia. After the last transport in 2000 some stallions have remained in Goudplaat.

Another group of eight mares, all born in our semi-reserves, was released in the fifth semi-reserve at Meppen ( Germany ) offered by the State Niedersachsen, measuring 65 ha. (165 acres). Two stallions from Denver and Minnesota (USA) joined them, giving them a chance of free mate choice to form their own harems in time. The territory has enough food supply for year round grazing for two harems. This semi-reserve has a very varied vegetation with different grasses and herbs, part of it being moorland and part of it agricultural land. The horses can look for shelter in the woodlands and have all possibilities for browsing on bushes and different trees. Even though the breeding programme of the foundation has stopped, there are still Przewalski horses here. They are part of the EEP, a joint breeding programme of several zoos.

In March 1995 the sixth semi-reserve for the Przewalski horses of the Foundation was established at Klosterwalde (Templin) some 100 km. north of Berlin. The 30 ha. large area is enlarged at present till 100 ha. The hilly pastures encircle a beautiful natural lake. In the forest parts the horses can find shelter. In 2000 the first foals have been transported to Mongolia.

The semi-reserve is part of the Naturpark Uckermärkische Seen (Staat Brandenburg). This Naturpark thanks its name to the numerous natural lakes in the area. The park is bordered by the cities Prenzlau, Lynchen, Fürstenberg, Zehdonick and Templin.