Przewalski horses are social living animals. They know one another face to face and keep up individual friendships. They live in groups composed of six to seventeen animals. There are harem groups consisting of a leading stallion, mares, foals and one to two years old offspring, and there are bachelor groups, casual in its composition. When they are about one and a half to three year of age the juvenile stallions and mares are ousted from the native group. 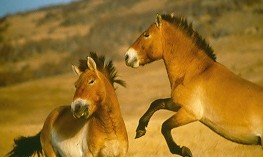 The young stallions immediately or after a brief interval will try to join the bachelors. A young mare is being picked up by another harem stallion or by one of the matured bachelor stallions of five years and older that is in the process of forming his own harem.

The groups whose home ranges overlap will often be confronted with one another. This may happen at a drinking place or on a much used track. In this way the groups get acquainted with each other.  At the time that there were only few free roaming groups at Hustai National Park the young stallions often wandered around for a considerably long time before they could join a group. They even left the Park in search of other – even domestic – horses. The rangers had to drive them back into the Park. With more groups in the wild, that know each other thoroughly, young animals are more easily accepted in other groups.