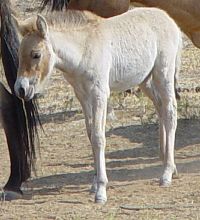 Only good Park management can guarantee the enduring protection and preservation of its wildlife and freely roaming Przewalski horses. In January 2004 the Dutch Ministry of International Cooperation did end its financial support to the Hustai Biodiversity Project.

During Hustai’s founding phase Mongolia’s Ministry of Nature and Environment proved itself a dedicated and loyal partner. Although the Ministry has bound to annual financial support for the country’s National Parks, the actual amount of money it can spend is quite marginal. The Ministry has little money, so international financial support is still vital after the termination of the subsidy from the Netherlands.

Enduring protection of Hustai’s Przewalski horse population and the research activities, that have been initiated around this population, will remain very important. Therefor, the Foundation will continue its annual financial contribution. For this purpose the Foundation has founded the ‘Hustain Nuruu National Park Foundation’ in 1997.

In the year 2004  a project targeted at the buffer zone around Hustai National Park was started. The Dutch Ministry of International Cooperation financed this project. A great problem is the present overexploitation of Mongolia’s pastoral grounds. The steppe around Hustai suffers also from this dilemma. In close cooperation with the Buffer Zone Council and the staff of Hustai National Park a management plan was devised. Point of departure was the involvement of the primary users of the steppe, the herdsmen.

Hustai National Park has an abundant and diverse aviary population. Spectacular are the black vultures, steppe eagles and the many different buzzards and falcons that flock the sky. Other remarkable steppe birds, like demoiselle cranes, black storks and pygme as well as great bustards are also frequently spotted inside Hustai.

In 2001 the Brehm Fonds (Germany) had provided the financial means (about EUR 47,000.00) for an inventory research of bird life in and around Hustai National Park. The research was executed by Mongolian biologists, who were trained and coached by a Dutch bird expert. The monitoring is still continuing. An extensive bird guide was published in 2015 composed by the  Mongolian biologists S. Gombobaatar and D. Usukhjargal.

As a consequence of research executed over the years, 223 species of birds of 119 genera, 43 families, and 17 orders have been registered in Hustai National Park.

Hustai National Park has a relatively big population of wolves within its boundaries. Thanks to Stichting DOEN (€ 10,000.00), WNF Nederland (€ 10,000) and Stichting Dierentuinen Helpen (€ 4,500.00) a comprehensive survey after distribution, habitat use and feeding habits of Hustai’s wolves was initiated in 2003. The Mongolian biologists and a female student from Wageningen University did field research. A joint Mongolian-Dutch team of expert supervisors trained the Mongolian staff.  Wolf monitoring is standard and ongoing process.