The selected home of the Przewalski horses in Mongolia is Hustai National Park. It is situated not far from the capital, Ulaanbaatar, and with its beautiful scenery, and of course its biggest asset, the wild roaming Przewalski population and other wildlife, it is highly attractive for both researchers as well as tourists. 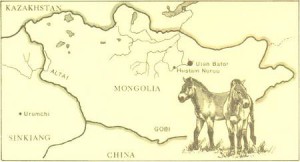 Establishment of the Park and reintroduction of the Pzewalski horses took place in two projects:
1. The Reintroduction Project for the Przewalski horses, which lasted ten consecutive years (1990 -2000);
2. The Hustain Nuruu Steppe Project (or biodiversity project), that was initiated in 1993 and which had a duration of ten years.

More on the background and aims of both projects.

Several other projects were or are being initiated in and around the park. These are related to preservation of the ecosystem, like the buffer zone project, or to the well being of the local population, like the medical project.

Nothing but a well-managed National Park will guarantee the lasting protection of its viable, freely roaming, population of Przewalski horses.

Setting up and maintaining a Park like this asks for considerable resources. The overview of the most important costs and financial contributions will tell you who helped us realize the return of the Przewalski horse to its home.

If you would like to meet the horses yourself, you can visit the park either as a tourist, an ecovolunteer or as researcher. For Mongolian researchers there is the Jan Bouman Scholarship.