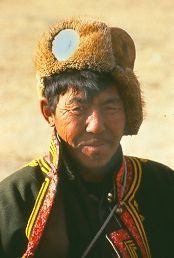 The reintroduction process of the wild horse has worked as a very strong impetus for the development of a gorgeous protected mountain steppe area where the high standard of diverse ecosystems guarantee the wealth of a varied animal and plant life. Thanks to the wild horse’s return the practically undisturbed steppe ecosystem could be restored. Effective protection has resulted in the return of the Mongolian gazelles and wild Argali sheep to the Park. Each of these large herbivores, together with some smaller grazers like the ground squirrel and Bobac marmot, contributes in the preservation of their unique grassland habitat.

The current stance of observed wildlife species is 55 mammals, 223 bird species, 16 kind of fishes, two species of amphibians and 400 different insects species. Many of these are included in the IUCN Red Book of Endangered Species: Mongolian gazelle, wolf, Corsac fox, manul and birds like the black vulture, black stork, Saker falcon, bustard and Demoiselle crane.

In January 2001 the renowned magazine Science published an article on the management of protected areas in the Tropics. Their investigation led the three authors, Bruner, Rice and Da Fonseca to 93 parks and reserves. They conclude that in order to gain good results from protected areas in the Tropics much will depend on the number of wardens employed, the approach towards poaching, an outstanding position in its unprotected surroundings and compensation of the local population. It is on these points that Hustai National Park scores very well and could gain the status of best protected national park in Mongolia.

The Convention for Biological Biodiversity acknowledges the complexity of conservation and sustainable use of nature in all its aspects. In order to realise this goal the so-called ‘ecosystem approach’ was devised. Not only plants and animals are important, but also clean water, stable soil, economical interests (i.e. use of forests), people that for their livelihood depend on nature and institutions – from village level to international networks and the United Nations – that are involved in this management. In 2001 the Mongolian Ministry for Nature and Environment (MNE) agreed with the Management Plan for Hustai National Park, as it was devised by the staff of Hustai National Park in close collaboration with the Buffer Zone Council. This plan also comprises of the exact zonation of Hustai National Park with its strict areas of tranquillity, temporal corridors for migrating herdsmen and their animals and scenic routes. Buffer zone management fits well in the above mentioned ecosystem approach. For detailed information on this policy and an in-dept analysis of how Hustai National Park is managed according to the twelve principles of the ecosystem approach we kindly refer to P. Wit and N. Bandi’s article An analysis of the management of Hustai National Park with the help of the twelve Principles of the Ecosystem Approach. 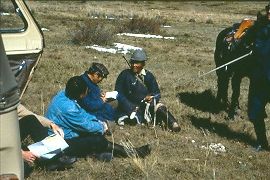 According to Mongolian notions Hustai National Park has a rather extensive staff at its disposal. There are 18 well-trained rangers and wardens, who daily patrol the area in close collaboration with the inspectors of the surrounding villages.

They are good in handling poachers and other ill-disposed people, preventing fires , driving out livestock and nomad’s horses that accidentally wandered into the Park, guiding the migrating herdsmen through the temporal corridors and helping Hustai’s scientific staff with the monitoring of the free roaming Przewalski horses and other wildlife. Hunting is illegal inside Hustai National Park. A team of three biologists, completed by the Jan-Bouman-Scholarship-bursal, are doing management-focused research on the changes in vegetation, wildlife, Przewalski horses and the carrying capacity of the area. To serve tourists the Park employs a number of personnel: guides, people taking care of the accommodations in the tourist camp, manning the information centre and those involved in the execution of the tourism program. With its staff of executives, office personnel (HNP and Ulaanbaatar) and drivers Hustai National Park employs some 50 people.